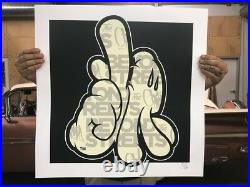 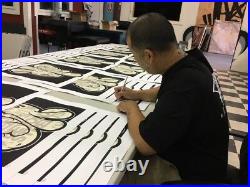 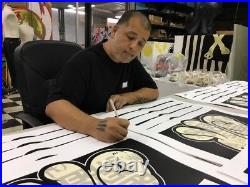 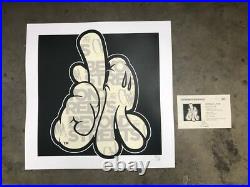 THE ART: BEYOND LA by OG SLICK. 24″ x 24″ Edition of 250 (Signed and Numbered with COA). 4 Color Silk Screen Print – 298 GSM Classic Crest Solar White. This was featured at the Los Angles Art Exhibit which ran from May 6 thru July 6th. Slicks LA Hands logo icon has become a sort of an anthem and symbol for Los Angeles pride! ARTIST BIO: Slick’s rise to the top can be traced back to the mid 80’s, from painting on the streets of Honolulu to the mean streets of Los Angeles. Slick spent his early years attending Art Center College Of Design during the day and doing graffiti at night. The legendary “Slick vs Hex” graffiti battle was pivotal moment in Slick’s career. He went from underground hell raiser to garnering worldwide acclaim, forever changing how graffiti characters are painted to this day. The international attention opened the doors for Slick to paint everything from music videos, feature films, album covers to full fledged gallery exhibits. It was during this time, he realized he could reach a larger audience by putting his art on t-shirts. Since his first designs in the late 80’s, Slick has designed graphics for the likes of Stussy, X-Large, Adidas, Obey, Disney and the list goes on. His graphic design aesthetic has influenced an entire generation of artists/designers. He pioneered a movement called “street wear” long before the term was even coined. Slick’s main focus nowadays is his clothing brand Dissizit! Over the past 12 years, Dissizit has established itself as a brand not to be taken lightly with their take no prisoner attitude on it’s assault on pop culture. Whether it’s painting a mural, designing a sneaker, formulating a paint scheme for an automobile, art directing graffiti for a video game, creating an entire collection season after season for Dissizit, or as small as signing his name for a fan, Slick treats each and everything he touches as a work of art that’s worthy of being Slick. 25+ years in the game and Slick still has shown no signs of slowing up. ABOUT BEYOND THE STREETSBEYOND THE STREETS (BTS) is the premier exhibition of graffiti, street art and beyond, celebrating the soaring heights to which the worlds most recognizable modern art movement has risen. BTS is a groundbreaking multimedia showcase of paintings, sculpture, photography, installations and more throughout 40,000+ sq ft of industrial indoor and outdoor space. The item “Beyond the Streets -Beyond LA by SLICK Signed & Numbered withCOA 250 Limited Ed” is in sale since Saturday, July 14, 2018. This item is in the category “Art\Art Prints”. The seller is “sub_d2018″ and is located in Alhambra, California. This item can be shipped worldwide.