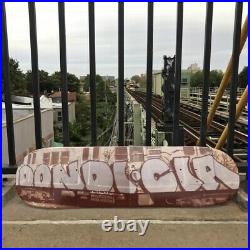 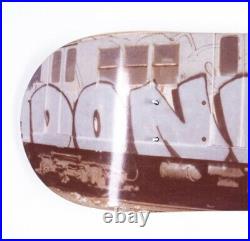 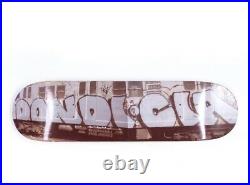 DONDI WHITE CIA Skateboard Deck Limited Edition of 50 Decks made in collaboration with 1XRUN and the Dondi White Estate. Sealed & Unopened Includes Wall Mount to Display the Awesome Deck. DONDI WHITE Dondi CIA. Type: Archival Pigment Print Transfer on Cold Pressed Steep Natural Skate Deck. Size: 8.25 x 32.25 Inches. Release: June 27, 2021. Auth: This RUN comes with a screen-printed signature, is hand-numbered and includes a signed Certificate of Authenticity from the Dondi White Estate and 1xRUN. The Dondi White Limited Edition Skate Deck. Is still sealed in its original wrapping. Unopened and in perfect condition. The skate deck is being stored out of direct sunlight in a clean, pet free, smoke free and climate controlled environment. 1xRUN has officially partnered up with The Dondi White Estate for a collaborative series of limited editions. The Dondi White Estate works with galleries and brands around the world to help bring Dondi White’s artwork to a new generation of art lovers world wide through collaborations that are authentic and meaningful. Dondi was an American graffiti artist best known for his dynamic lettering and stick figures. His work, whether painted on canvas or on walls, is characterized by a dynamic energy and explosive use of color. Born Donald Joseph White on April 7, 1961 in New York, NY, he began his career in the early 1970s as part of the group of graffiti artists known as The Odd Partners, who worked primarily on the M, J, and L subway lines during the 1970s. In 1977, Dondi formed his own group, known as CIA, and established his reputation as one of the most stylistically innovative and influential graffiti artists of his generation. The photographer Martha Cooper documented how Dondi painted a subway car in her series Children of the Grace (1979), which also appeared in the book Subway Art, published in 1984. In 1980, Dondi took part in the Esses Studio project, which was funded by the art patron Sam Esses, and sought to preserve subway art that was being systematically removed by the MTA. At this time, Dondi began to work on canvas, and became associated with a group of legendary artists working in the East Village, including Futura, Keith Haring, and Jean-Michel Basquiat. His canvas works reiterated the lettering, symbolic icons, and stick figures that were his signature marks on the streets, while his later work from the 1990s included collages that juxtaposed pencil drawings with blueprints of the subway systemwhich had previously served as his canvas. Sadly, the artists career was cut short, and Dondi died on October 2, 1998 from AIDS at the age of 37. His work has been exhibited at the Groninger Museum in the Netherlands, the Fun Gallery in New York, and the Musée des Monuments Français in Paris, among others. The item “DONDI WHITE CIA Limited Edition Skate Deck #5/50 Hand Numbered With COA & Mount” is in sale since Wednesday, July 28, 2021. This item is in the category “Art\Art Prints”. The seller is “topshelfprintsandrecords” and is located in Denver, Colorado. This item can be shipped worldwide.