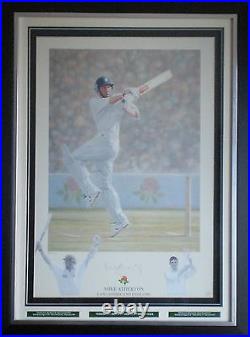 Michael Atherton Signed Limited Cricket Print Display – Framed. Frame Size: 770 mm x 570 mm. Personally Signed by: Michael Atherton. Double Mounted: Cream & Black. Frame: Black with Silver Trim. This limited print display is personally signed by ex England and Lancashire Captain, Michael Atherton, it is limited to 1997 and comes with his Test and ODI averages expertly mounted and framed with a certificate of authenticity. Atherton’s first tour as captain, to the West Indies in the winter of 1993-94, was not a success, as England lost 3-1. This was a series of highs and lows: Brian Lara of the West Indies compiled a world record of 375 against them at Antigua; England was bowled out for 46 to lose the third Test (and with it the series) but then roared back at Bridgetown to win the 4th Test thanks to two centuries from Alec Stewart. For his part, Atherton was the best of the English batsman with 510 runs at 56.67. Some teammates say that Atherton put up his finest performances when he was “against the wall”, like his monumental 185 in 643 minutes against South Africa, and the onslaught from Allan Donald in 1998 and that this prompted Steve Waugh to dub him “The Cockroach” (being very hard to stamp out). However, the fact that Atherton was dismissed 19 times by Glenn McGrath, the Australian opening bowler (a record for any bowler against one batsman) suggests that this was a side of Atherton that Waugh seldom saw first-hand. Atherton’s record against Australia is modest; he averaged under thirty, with only one century in 33 tests. Atherton has the dubious honour of having the lowest batting average of any player to have scored 6000 or more runs in Test cricket. Heroes Memorabilia are an AFTAL registered dealer #175, AFTAL are an organisation working in co-operation with the Police Force & The Trading Standards Authority to stamp out Fakes & Forgeries. Our aim is to bring you the best memorabilia available at all times. Don’t hesitate and miss out on this once in a lifetime opportunity, you will see this valuable piece of memorabilia turn into an instant investment. All the autographs shown were either obtained in private signing sessions or through trusted dealers. This item is in the category “Sports Memorabilia\Cricket Memorabilia\Autographs\Signed Prints”. The seller is “heroesmemorabilia2007″ and is located in this country: GB. This item can be shipped to United Kingdom.