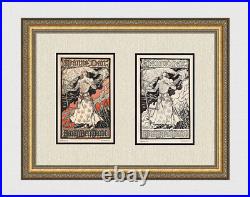 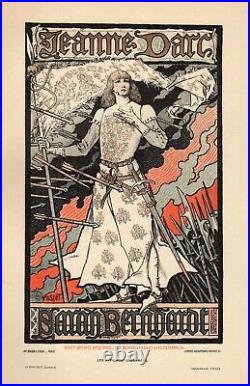 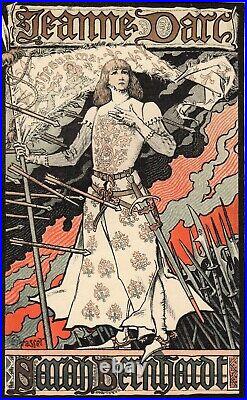 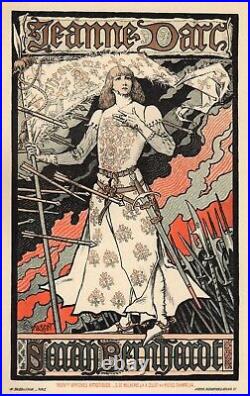 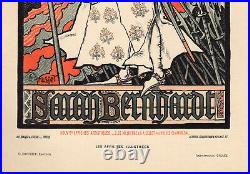 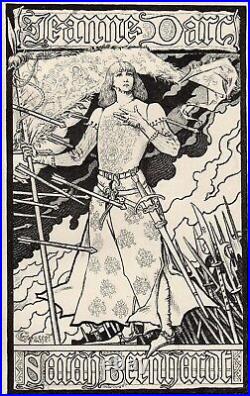 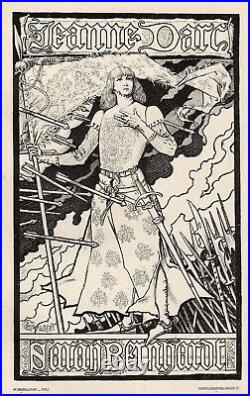 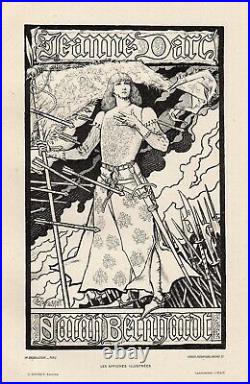 Of the world’s finest artists from. Our collection to yours. Thank you for visiting.. Eugene Grasset (Swiss, 1845 – 1917). Sarah Bernhardt as Jeanne d’Arc. Stone lithograph on Japon Paper. Signed in the plate, lower left. One of only 25 printed on Japon paper and accompanied by single color proof. (Each) Sheet Size: 8 3/4 x 12 1/2 inches. Mat Opening: 6 1/4 x 10 inches. Approximately 23 3/4 x 18 1/2 inches. Gallery matted and framed in a new solid wood moulding. Sarah Bernhardt (born Henriette-Rosine Bernard; 22 or 23 October 1844 – 26 March 1923) was a French stage actress who starred in some of the most popular French plays of the late 19th and early 20th centuries, including La Dame Aux Camelias by Alexandre Dumas, fils; Ruy Blas by Victor Hugo; Fédora and La Tosca by Victorien Sardou; and L’Aiglon by Edmond Rostand. She also played male roles, including Shakespeare’s Hamlet. Rostand called her “the queen of the pose and the princess of the gesture”, while Hugo praised her “golden voice”. She made several theatrical tours around the world, and was one of the first prominent actresses to make sound recordings and to act in motion pictures. Eugène Samuel Grasset was a Swiss decorative artist who worked in Paris, France in a variety of creative design fields during the Belle Époque. He is considered a pioneer in Art Nouveau design. Grasset was born in Lausanne, Switzerland on 25 May 1845. He was raised in an artistic environment as the son of a cabinetmaker and sculptor who taught him at an early age how to use the chisel and the gouge. After completing his education, he visited Egypt, an experience that would later be reflected in a number of his poster designs. He became an admirer of Japanese art, which influenced some of his designs as well. Between 1869 and 1870, Grasset worked as a painter and sculptor in Lausanne. He moved to Paris in 1871 where he designed furniture, wallpapers, fabrics, and tapestries as well as ceramics and jewelry. He created architectural elements of woodwork that were integrated into buildings. His fine art decorative pieces were crafted from ivory, gold, and other precious materials in unique combinations and his creations are considered a cornerstone of Art Nouveau motifs and patterns. It was poster art, however, that quickly became his forte. Some of his works became part of the Maîtres de l’Affiche, including his lithograph, “Jeanne d’Arc Sarah Bernhardt”. In 1890, he designed the “Semeuse who spreads seeds of dandelion” logo used by the dictionary publishers, Éditions Larousse. With the growing popularity of French posters in the United States, Grasset was soon contacted by several American companies. In the 1880s, he did his first American commission and more success led to his cover design for the 1892 Christmas issue of Harper’s Magazine. In 1894 Grasset created “The Wooly Horse” and “The Sun of Austerlitz” for The Century Magazine to help advertise their serialized story on the life of Napoleon Bonaparte. The “Wooly Horse” image proved so popular that Louis Comfort Tiffany recreated it in stained glass. Grasset’s work for U. Institutions helped pave the way for Art Nouveau to dominate American art. Grasset taught design at the École Guérin from 1890 to 1903, at the École d’Art graphique in the rue Madame from 1903 to 1904, at the Académie de la Grande Chaumière from 1904 to 1913, and at the École Estienne in Paris. Grasset had freely adapted the alphabet of Nicolas Jenson (1471) with the intention of using it to print a book on his own method for ornamental composition, inspired by the courses he gave to the Guérin school. Georges Peignot acquired Grasset’s alphabet and obtained an official patent October 7, 1897 for the typeface under the name, “Grasset”. He then gave Henri Parmentier, the workshop’s punchcutter, the mission to engrave it. In 1896 he published a dissertation on the use of plants in designs, that featured images of designs prepared by his students. Among his students were Paul Berthon, Georges Bourgeot, Paul Follot, Marcelle Gaudin, Augusto Giacometti, Arsène Herbinier, Anna Martin, Mathurin Méheut, Juliette Milési, Otto Ernst Schmidt, Auguste Silice, Maurice Pillard Verneuil, Aline Poitevin, Pierre Selmersheim, Tony Selmersheim, Camille Gabriel Schlumberger, Eliseu Visconti, and Philippe Wolfers At the Universal Exhibition of 1900 in Paris, the G. Peignot et Fils typefoundry, introduced the “Grasset” typeface, an Italic design Eugène Grasset created in 1898 for use on some of his posters. Eugène Grasset died in 1917 in Sceaux in the Hauts-de-Seine département, southwest of Paris. Accompanied by a Certificate of Authenticity and is Fully Guaranteed to be Certified as Described. Any framing included in a listing is double matted and framed in a solid wood moulding. We can also frame any pieces not listed as such. We are usually half the price of a regular framer. We guarantee all our listings to be 100% as described. This item is in the category “Art\Art Prints”. The seller is “themadhattercollection” and is located in this country: US. This item can be shipped worldwide.